Most people have known China by the long history, vast territory, abundant resources and various landforms. Therefore, there are many amazing places in China which have also attracted a number of photographers and amateurs’ attention. But are you actually clear which the holy photography destinations are? Let me give you some inspirations!

Zhangye Danxia National Geological Park is the best and biggest Danxia landform in China and a representative model of Chinese colorful Danxia landform with highly ornamental value and photographic value. In 2005, it was awarded as “One of the most beautiful Danxia Landforms in China”.

Zhangye Danxia Landform not only has the common features of marvelous and precipitous as the general Danxia landforms, but also is well-known for its unique and distinctive colors. It seems that the color of oil paint is wiped off the superficial color through years of scour and then exposes its brilliant colors. Red, yellow, orange, green, white, steel-gray, gray black, off-white and other countless bright colors can be seen everywhere in a radius of over 10 square kilometers which decorate the ravines and hills gorgeous. The mountains also present in various shapes, so the colorful landscapes are updating constantly and compressed into distinct layers with the changes of time and whether.

September and October every year are the best time to photograph Danxia landscape. Zhangye Danxia Landform opens all year round from 7 a.m. to 6 p.m. The sunrise and sunset in Danxia are the perfect photographic time you should not miss. 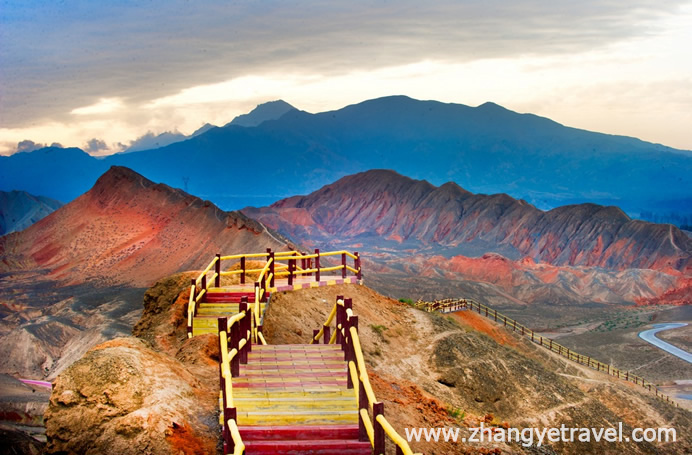 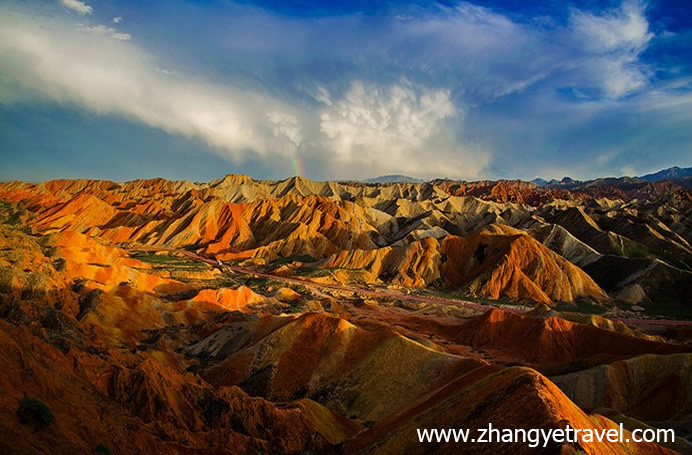 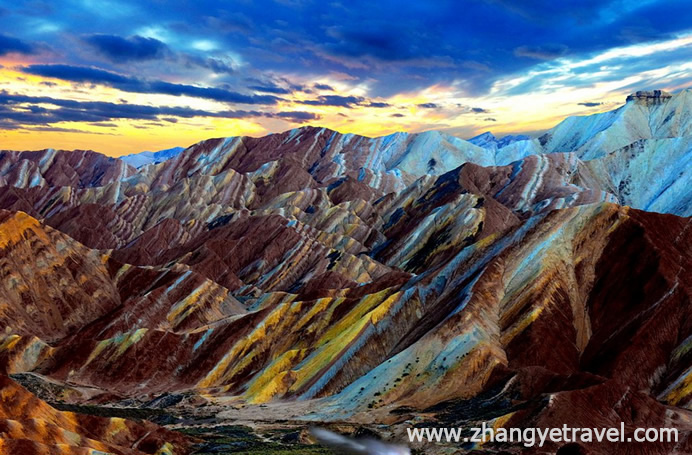 As an old Chinese saying goes, “Guilin scenery stands out as the world's best, and Yangshuo scenery tops those of Guilin.” More than twenty thousand tall and straight peaks in the territory of Yangshuo snake their ways around 17 rivers in the hills. It is because of green mountains, clear water, fantastic caves and charming rocks that Yangshuo has gained such a famous fame. Peaks cast the reflections on the clear stream which makes everything here is so attractive and charming. Yangshuo is truly a fairyland on earth in the eyes of photographers. Sunglow, mountain peaks and Lijiang River create the Yangshuo such a fairyland, especially when the mist belt or sea of clouds formed after the rain appears, the whole scene is quite spectacular.

Green lotus hill is a well-known location to photograph Yangshuo sunrise. You can not only take a bird's-eye view of the overall Yangshuo country, but also enjoy the fascinating Yangshuo scenery surrounded by mountains, along with photographing the morning fog of Yangshuo, morning glow of Lijiang River and Dongling sunrise. The optimal months for photography in Yangshuo are April and October every year. 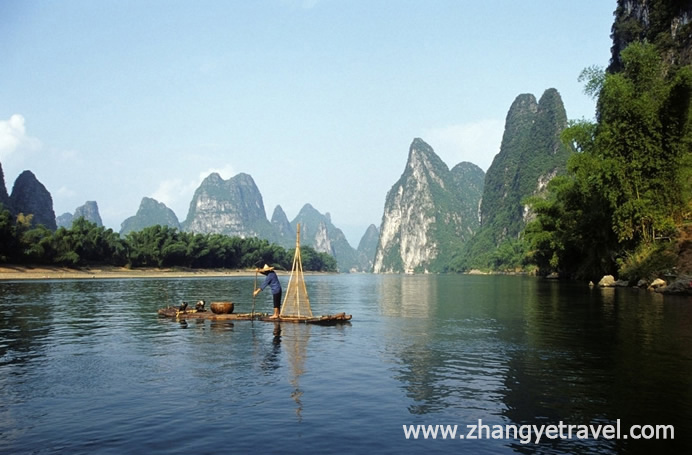 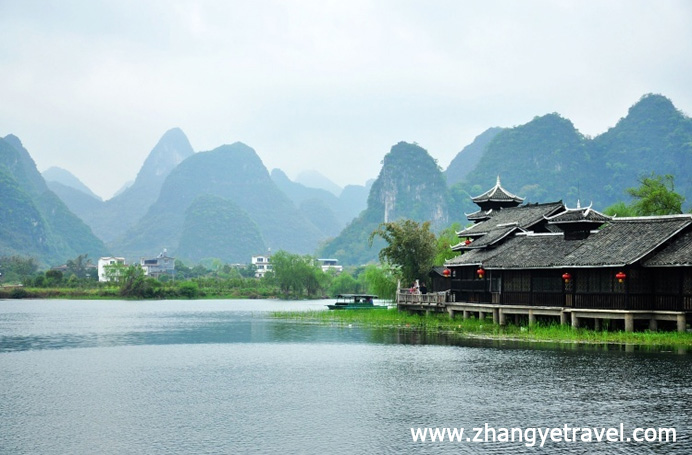 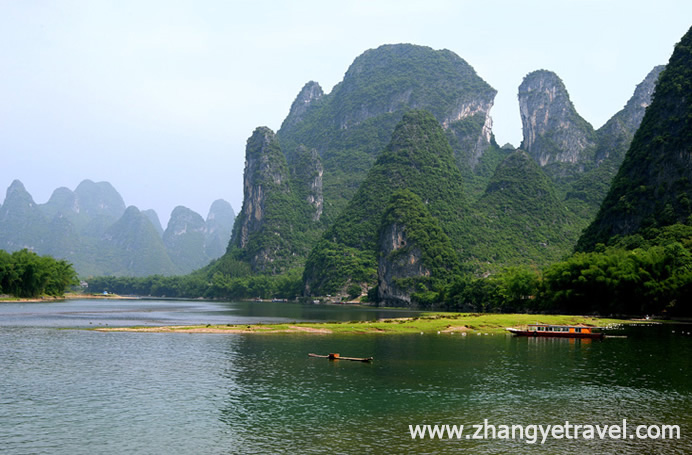 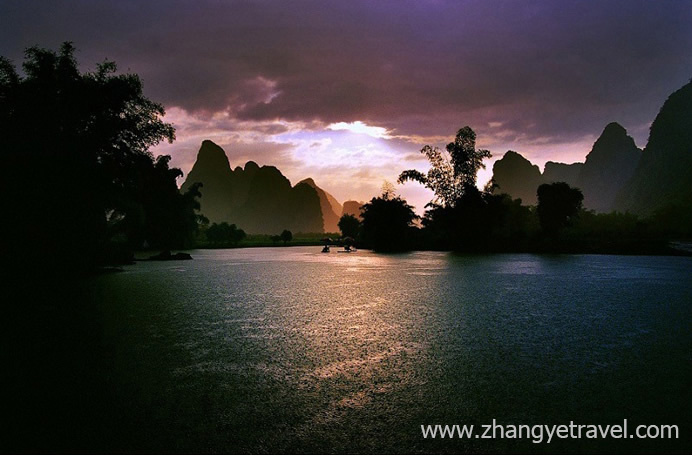 Huangshan Mountain is designated “the most beautiful mountain in China” by the UNESCO World Heritage Site. Huangshan Mountain, 1863m above sea level, is known throughout the world for its five unique scenic features of legendary pines, picturesque rocks, the sea of clouds, hot springs and winter snow. Hence, Huangshan Mountain is credited to be “the King of all the mountains”.

The optimal seasons for photography in Huangshan Mountain are winter (December to February) and spring (March to May). The sunrise, sunset glow, sea of clouds and snow-covered landscape are superb sceneries any photographers would never miss. 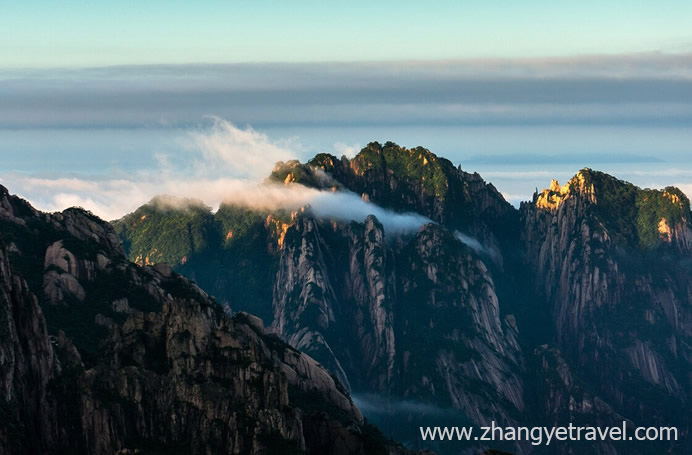 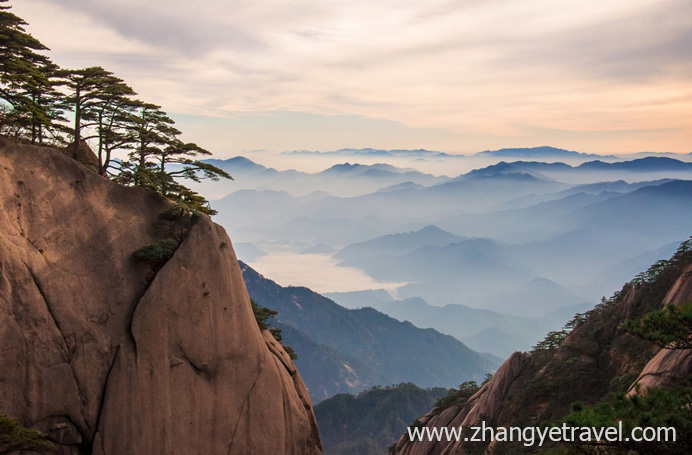 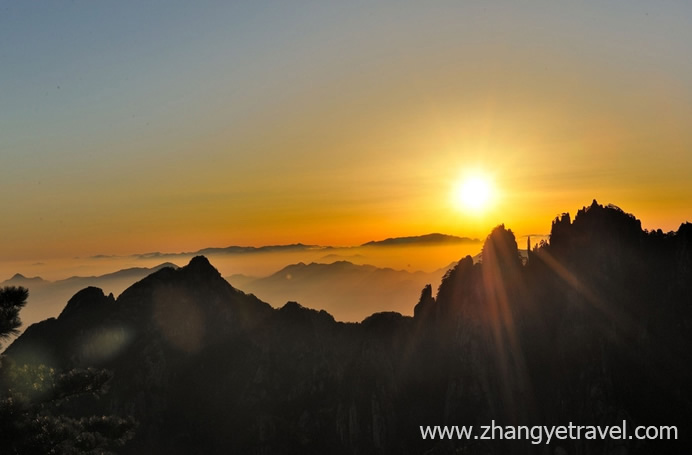 Jiuzhaigou Valley was listed in the world’s Heritage by the Unesco in 1992s. With an elevation of over 2000m, Jiuzhaigou Valley has the widespread primeval forest and 108 lakes of various sizes and shapes. Lake water is not only blue, limpid and crystal clear, but also presents different hues and water rhymes with the illumination variation and season progress. Light yellow, dark green, deep red, azure green and other colors are combined into irregular geometric patterns in the lakes and dip-dye together to be so variegated in color. These lakes are connected with each other by rushing waterfalls to be distinctive and ever-changing. Therefore, Jiuzhaigou Valley is regarded as “A Wonderland” and “the King of Waterscape”. 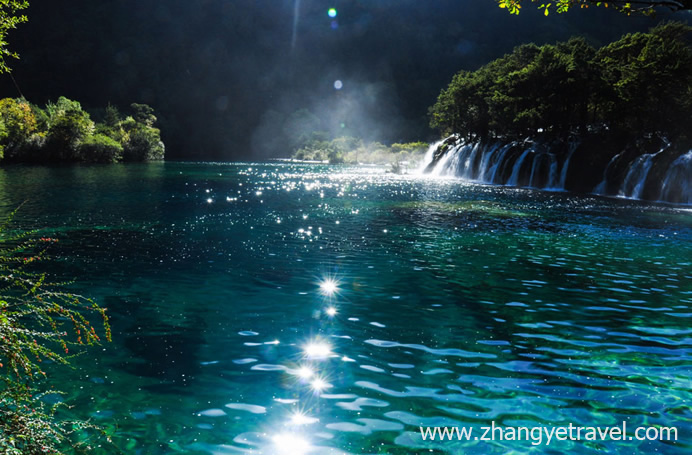 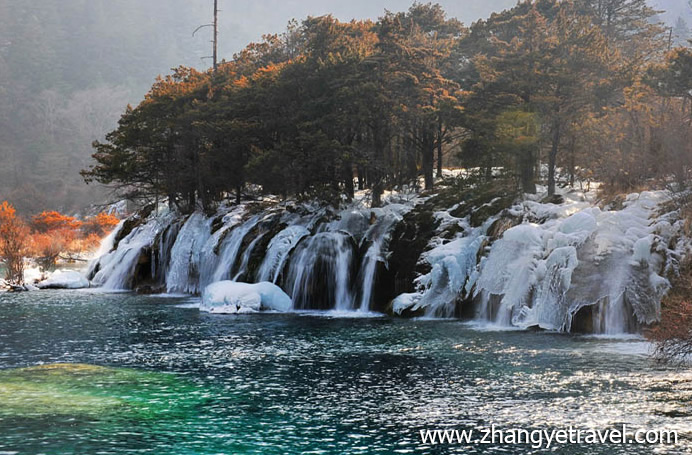 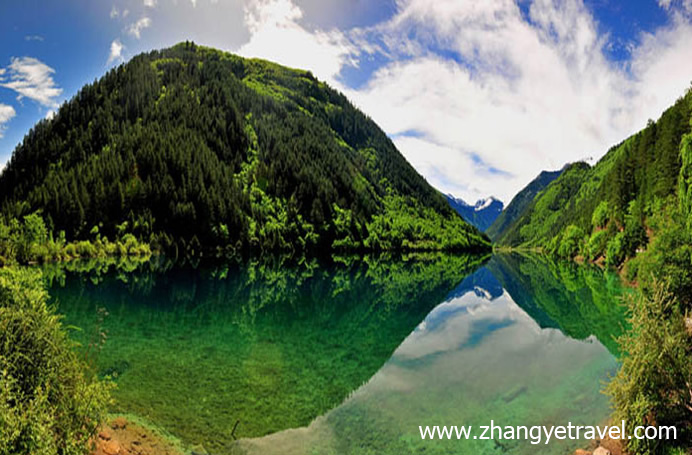 The optimal seasons for photography in Zhangjiajie National Forest Park are spring (March to May) and autumn (September to November). There are fresh and fragrant grass and fallen petals in riotous profusion in spring. Meanwhile, the golden autumn sky is clear and mountains are all tinged in the cloud-covered and towering mountains as if it is a real fairyland. 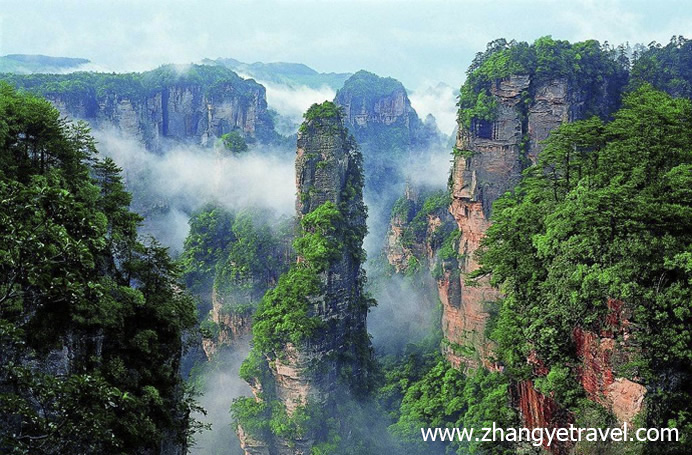 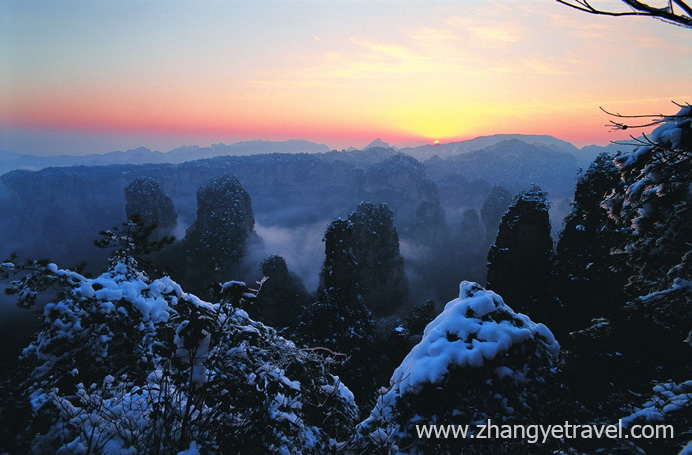 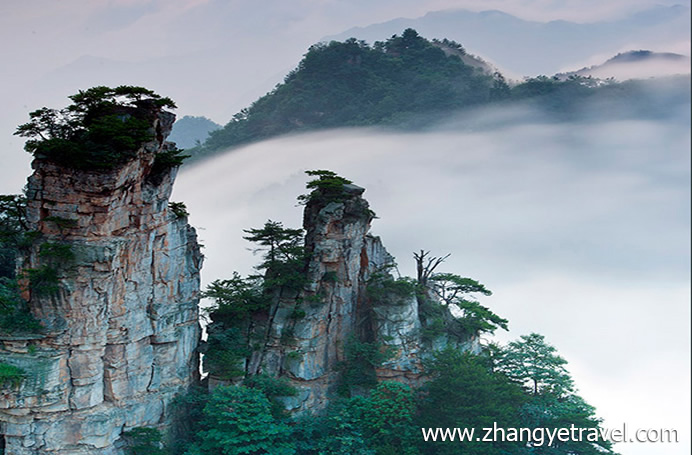 There is a mountain extremely alike a phoenix as if to flying in the southwest of Phoenix Ancient City, from which the small city has its name. Phoenix Ancient City is located by the bank of Tuojiang River surrounded by mountains. Stone city street, the ancient tower as well as the ancient  Court of Ming and Qing dynasty locate themselves in the town. Meandering Tuojiang River, crystal-clear rival water, drifting boats and singing folk songs remain outside the town. What a serene and peaceful small city scenery!

Phoenix Ancient City is the Miao and Tujia minority area filled with rich ethnic minorities flavor. Stilted house, ancient city, green hills, blue water and pavilions sketch a tranquil ancient city scenery. The scenery in Phoenix Ancient City is picturesque through four seasons, the prime period for photography are from March to April and from September to October. It is generally misty, hazy and fogged on Tuojiang River in the morning of Phoenix Ancient City. If you want to shoot the great morning fog, around 5:30 a.m. will be the best opportunity. 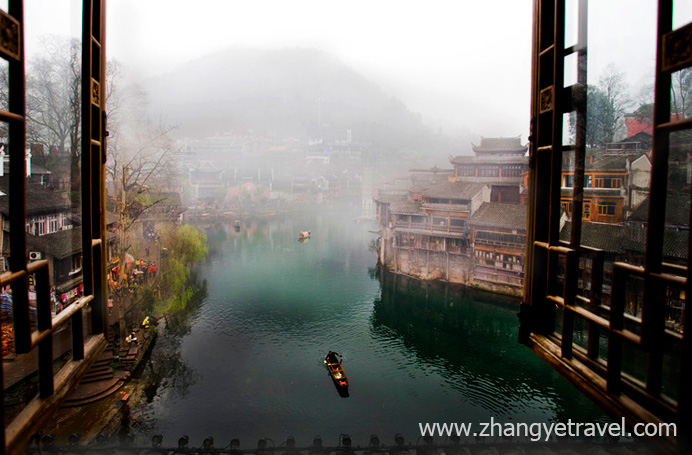 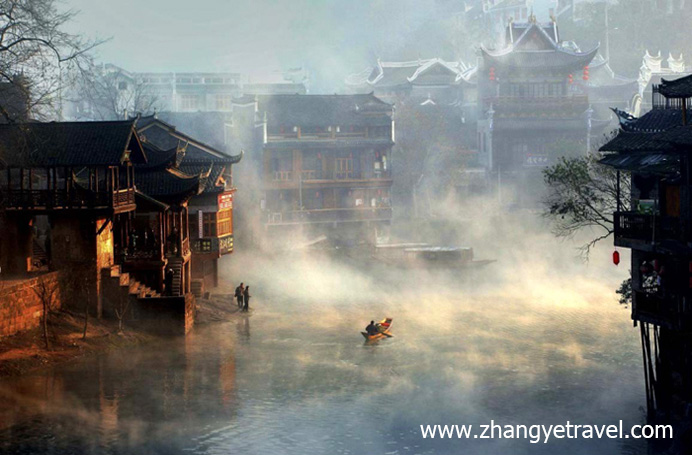 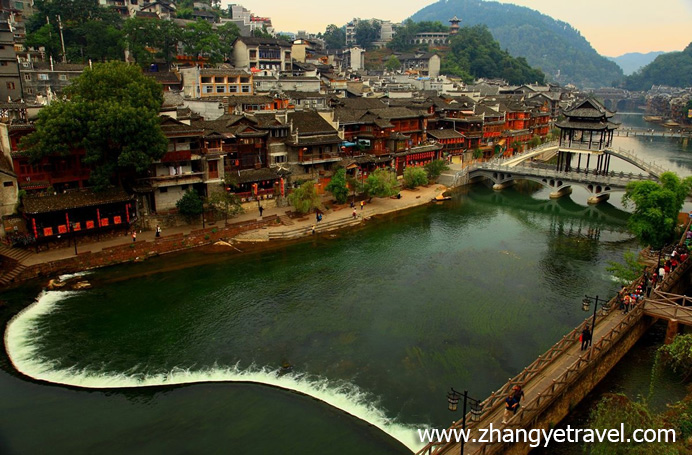 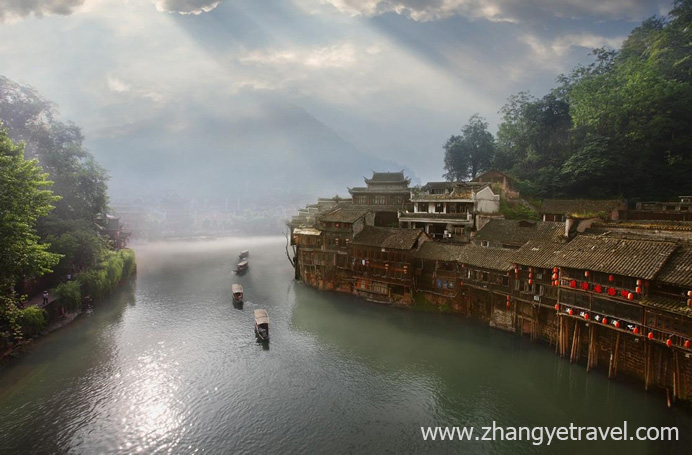